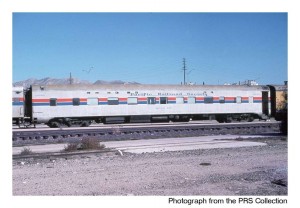 After several months of hard work, the Pullman sleeper Imperial Bird has completed its journey from East Los Angeles to Campo.  From the logistical planning and partial disassembly to the movement and reassembly, PSRMA volunteers kept a careful eye on “the Bird” while she traveled to her new nest at the Pacific Southwest Railway Museum.  The full history of the car, once one of the most luxurious accommodations offered on Union Pacific’s named trains, is now posted on our website along with a collection of photographs from the move to the Museum.  Many thanks are due to Pacific Railroad Society for their thoughtful donation and to Association members Robbie Smith, Martin Caestecker, John Shannon, and the Hyatt family for their efforts to ensure the car made it to Campo (which included rolling out both trucks, removal of the Waukesha ice engine and enginator, removal of the propane tank carrier, dissassembly of all four brake cylinders to make the trucks movable by truck, plus planning and coordination efforts).  Short term plans see the Bird’s interior cleaned up and the car put on interpretive static display for visitors to enjoy as a look into vintage sleeping car travel and accommodations.  When time and funds permit, Imperial Bird will again bear the Union Pacific’s iconic Armour Yellow and Harbormist Grey livery as part of a full interior and exterior restoration.