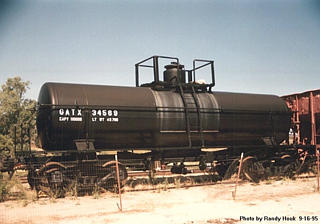 This “bottle on wheels” was the museum’s first all-steel and non-riveted tank car, and formerly served for many years on an industrial railroad.
Built by General American Transportation Corp., Warren, OH, or East Chicago, IN; 1930s(?)

The early history of GATX #34569 is unknown. It was later used for many years by the Southwestern Portland Cement Company at its plant in Victorville, CA, and on its 15-mile Mojave Northern Railroad to its rock quarry in the mountains. It was numbered SWPC #138 during this service.

In June 1984, SWPC #138 was donated to the PSRMA by the Southwestern Portland Cement Company together with other SWPC rolling stock and equipment. It was taken to San Diego by the Santa Fe and then to the Grossmont industrial spur in La Mesa by the SD&IV. Stored there for two years, it was repaired, partially repainted, and renumbered GATX #34569 by volunteer museum workers, who uncovered that number during cleaning.

The tank car was taken to Campo on “Great Freight II” on February 28, 1987. It was again cleaned, stripped, and repaired in July 1987, and repainted black and relettered in early 1988. GATX #34569 is now on display in operating condition at the museum in Campo.