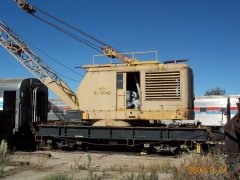 This giant self-propelled crane can lift extremely heavy loads, including railroad cars, and is capable of moving itself as needed.

This American Model #508 crane, serial #1972, weighs 50,000 lbs. (25 tons). It has an 80-foot boom rated at 70,000 lbs.(35 tons), originally 80,000 lbs. (40 tons), at 15 feet when the outriggers are extended. The boom can be raised from horizontal to near-vertical, and the crane can swivel on its base. The unusual cross-mounting of the upper block to the boom was made especially for the Navy’s order by American Hoist & Derrick. USN #84-00412 has a Caterpillar 8-cylinder D-17000 diesel engine rated at 160 hp at 850 rpm. This provides power for both hoisting and locomotion. The crane can perform clam shell, magnet, or hook work, in addition to light railroad switching. It was originally painted black with gray interior, and later was painted yellow for better visibility.

USN #84-00412 was placed in service at the U.S. Naval Shipyard at Hunter’s Point in San Francisco in December 1944. When the yard closed in 1966, this crane was selected from a group of a dozen for transfer to the U.S. Naval Station at 32nd Street in San Diego, because its diesel had recently been rebuilt and had less than 100 hours of service on it. Sent to San Diego by ship, USN #84-00412 worked along the ships’ piers most of the time. Later it was rigged with a clam shell and worked in the base salvage yard.

The crane was donated to the PSRMA on February 2, 1980 by the Navy, with the museum paying a paperwork and ownership transfer fee to the Surplus Property Department of the State of California. On February 23, 1980 it was moved through the Navy yard by a museum crew; through the Santa Fe yards by a Santa Fe crew to the SD&AE transfer tracks; and by the museum crew again to the SD&AE yards. It was stored there for three years, during which it was tested and repaired by museum volunteers in February 1981.

In July 1983 the crane’s boom was taken apart by museum volunteers and loaded into the museum’s gondola (ex-ATSF #72312), as idler cars were not available for use behind the crane when it was taken to Campo on the museum’s first “Great Freight” in July/August 1983. The boom was reassembled at the museum in Campo.

USN #84-00412 is currently in use as needed at the museum, primarily in lifting museum cars off their trucks for maintenance. It has travelled under its own power on the mainline to Miller Creek to assist museum crews in tracklaying, and was used by the Walter Barber Construction Company, contractors for the SD&IV, during the replacement of two fire-destroyed trestles in the Carrizo Gorge in early 1990. It’s maintained in operating condition, and will be further repaired and repainted in its original colors as time and funds permit.