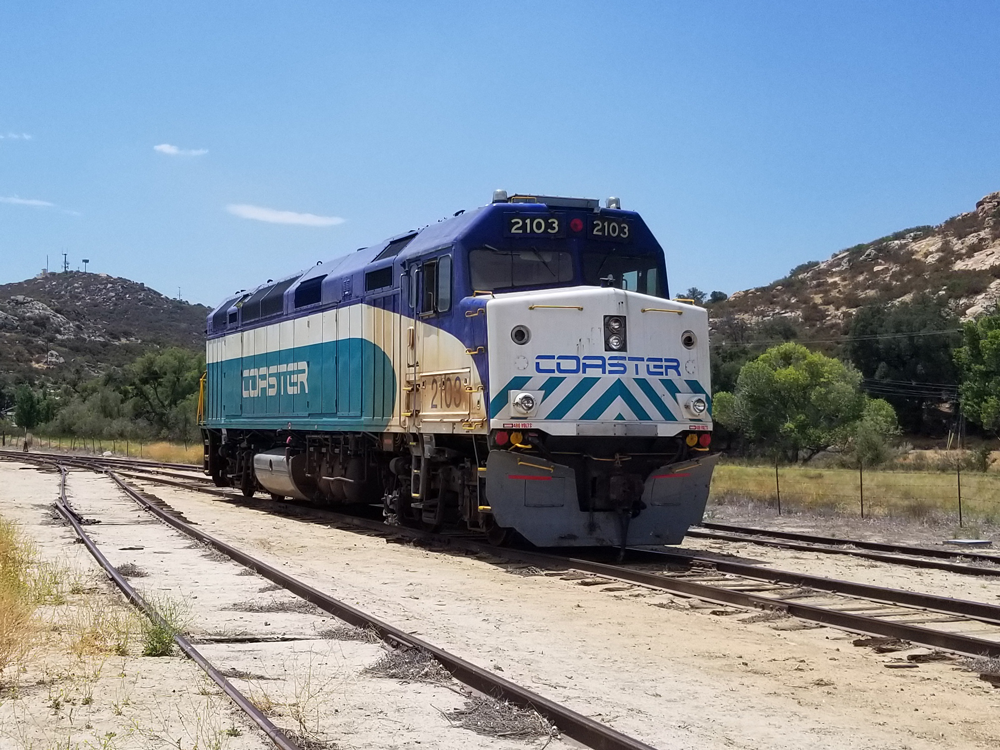 Our organization’s mission statement places an emphasis on the preservation of San Diego County’s railroad history. As a railroad that is entirely captive to San Diego County, the North County Transit District’s Coaster commuter service is perhaps the most relevant contemporary railroad to our mission. For this reason, when NCTD publicly announced in early 2018 that it would retire their F40PHM-2C locomotives, we knew that we had to do everything in our power to preserve one.

The F40PHM-2C locomotives were manufactured for the Coaster service in 1994 by Morrison-Knudsen Corporation using a mixture of EMD and M-K locomotive components, including several remanufactured components from older freight locomotives. They entered revenue service on February 27, 1995 and spent just shy of 26 years in service before retirement. During the early to mid-2000’s, NCTD sent each of the five locomotives to Norfolk Southern’s Juniata Locomotive Shops in Altoona, Pennsylvania for complete rebuilds. This extended the lives of the locomotives which were constantly subjected to the demands of commuter train service and the corrosive environment from the adjacent Pacific Ocean.

By the late 2010’s, the locomotives were showing signs of their age and NCTD began seeking funding to replace them. NCTD was able to secure funding from the The Carl Moyer Memorial Air Quality Standards Attainment Program, a grant program operated by the California Air Resources Board, to purchase five new EPA Tier-4 compliant Siemens SC-44 Charger locomotives to replace the F40s. As an emissions-reduction grant, the Carl Moyer Grant required NCTD to first disable and then scrap the F40 locomotives.

When the PSRMA first reached out to NCTD in early 2018, the request to acquire an F40 locomotive was very much open-ended; we were willing to either purchase one of the locomotives or accept an outright donation. We spent nearly two years building a relationship with NCTD and researching ways to preserve one of the F40 locomotives. As part of this effort, we worked with CARB and the San Diego County Air Pollution Control District to explore modifications to the Carl Moyer Grant conditions. After lengthy discussions, we were able to persuade CARB to modify the grant conditions to spare the locomotives from mandatory scrapping, instead only needing to disable their diesel engines. Through these actions, the PSRMA paved the way to guarantee that the locomotives would not be lost to history! Although receiving an operating F40 locomotive was not a reality, the locomotives still had enormous historical value to our organization. In late 2019, NCTD made an offer to donate all five F40 locomotives to the PSRMA. With so many opportunities to preserve and potentially sell or trade several of the locomotives to other museums, we accepted the offer. 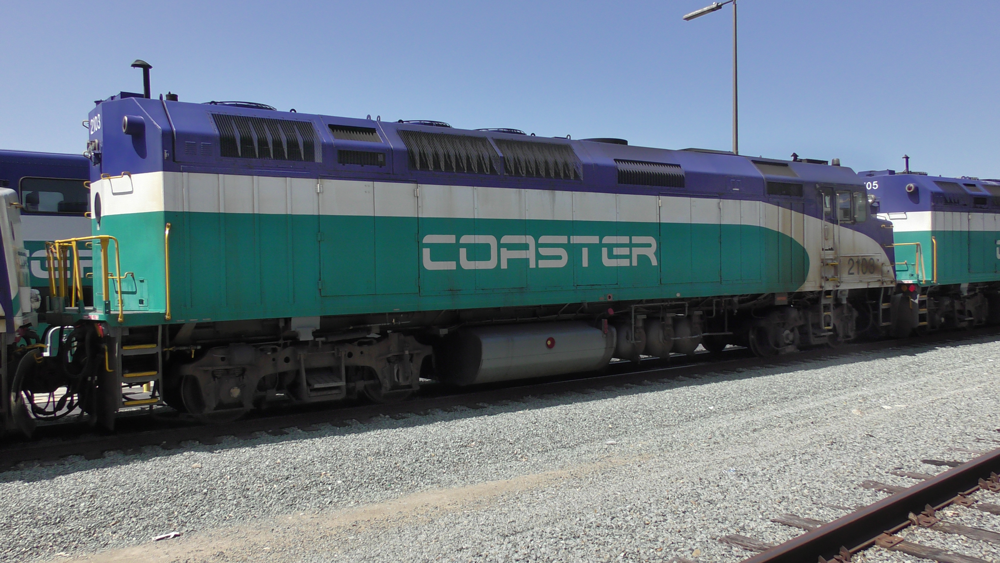 The Pacific Southwest Railway Museum in Campo is landlocked with no connection to the outside world by rail. We lost our rail connection to the east in 2008 when a trestle just east of our museum was found to have deteriorated to the point where it could no longer safely support passing trains. Our rail connection to the west was lost on Christmas Day, 2009, when the timber lining of Tunnel 3 just south of the International Border with Mexico burned, causing the tunnel to collapse. Since that time, all pieces of rail equipment acquired by our organization have been trucked to Campo. Due to recent changes in federal regulations, two bridges between Campo and the International Border also needed to be load rated and inspected to permit rail traffic, a significant financial hurdle to the PSRMA. We spent 2020 pricing out the work to be done. We also started talks with the Mexican government’s administrative agency who would ultimately be responsible for reopening Tunnel 3. In late 2020, the PSRMA entered into a Memorandum of Understanding with NCTD. This MOU formalized the donation of the five retired and disabled F40 locomotives to the PSRMA. NCTD also agreed to cover the costs of the bridge load ratings and inspections. The initial deadline to remove the locomotives from NCTD property was April 15, 2021.

Knowing that the process to reopen Tunnel 3 would extend beyond the deadline to move the locomotives, the PSRMA sought a track somewhere in San Diego County where the locomotives could be stored temporarily. We met with the Mexican railroad agency officials in February, 2021 to discuss reopening Tunnel 3. The agency was willing to support the PSRMA’s efforts, but did not have the budget to fund the tunnel reopening. Knowing sources of funding for construction projects were available, we began scoping out the costs to make this project happen. We commissioned a geological study to provide a basis of design for clearing the tunnel. The results of this study allowed us to seek a quote from a contractor to clear the tunnel. The final price quote came out to nearly $308,000! With such a high price tag, the PSRMA had to put a pause on these ambitions and refocus efforts on finding temporary storage for the locomotives. Unfortunately, discussions with multiple industrial track owners in San Diego County failed to yield a location where the locomotives could be economically stored. This problem became insurmountable despite two deadline extensions from NCTD.

In early 2022, the PSRMA finally had to change gears and scale back ambitions to get all five F40 locomotives to Campo. Research into the costs of trucking revealed that no more than one locomotive could be economically trucked to Campo; the remaining four would have to be sold or donated. After discussions with several potential buyers, we agreed to enter into a sales agreement with Coast Rail Services in Anaheim, California. CRS would purchase three of the locomotives from the PSRMA and store the remaining two while we worked out the plans for them. We selected locomotive 2103 for preservation as it was in the best mechanical and cosmetic condition.  Notably, 2103 was the last of the F40 locomotives to go through the Norfolk Southern rebuild. The PSRMA also began talks with the Southern California Railway Museum, who had previously expressed interest in the locomotives, to transfer locomotive 2105 to them. In April 2022, the F40 locomotives were moved by the BNSF Railway from NCTD’s Stuart Mesa Yard in Camp Pendleton to CRS in Anaheim. 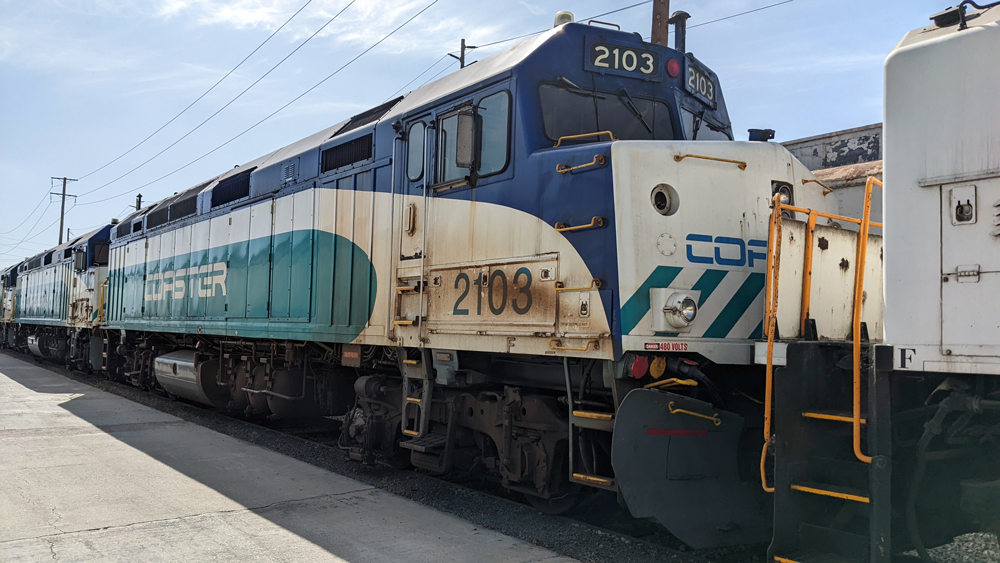 The PSRMA contracted with North American Heavy Haul to truck locomotive 2103 to Campo. NAHH in turn subcontracted the move to Contractors Cargo Company, an agent of Bennett Motor Express. Contractors Cargo engineered a plan to haul the locomotive to Campo using two heavy-haul truck dollies. To lift the locomotive on and off the dollies, we contracted with Bob’s Crane, a local business based out of Lakeside, California. Bob’s Crane supplied two cranes with 275-ton and 350-ton capacities to accomplish the lifts. The PSRMA was also able to work with Plastic Express, a bulk commodity shipper, which offered the use of their track leased from BNSF in National City to accomplish the locomotive lift onto the truck dollies. 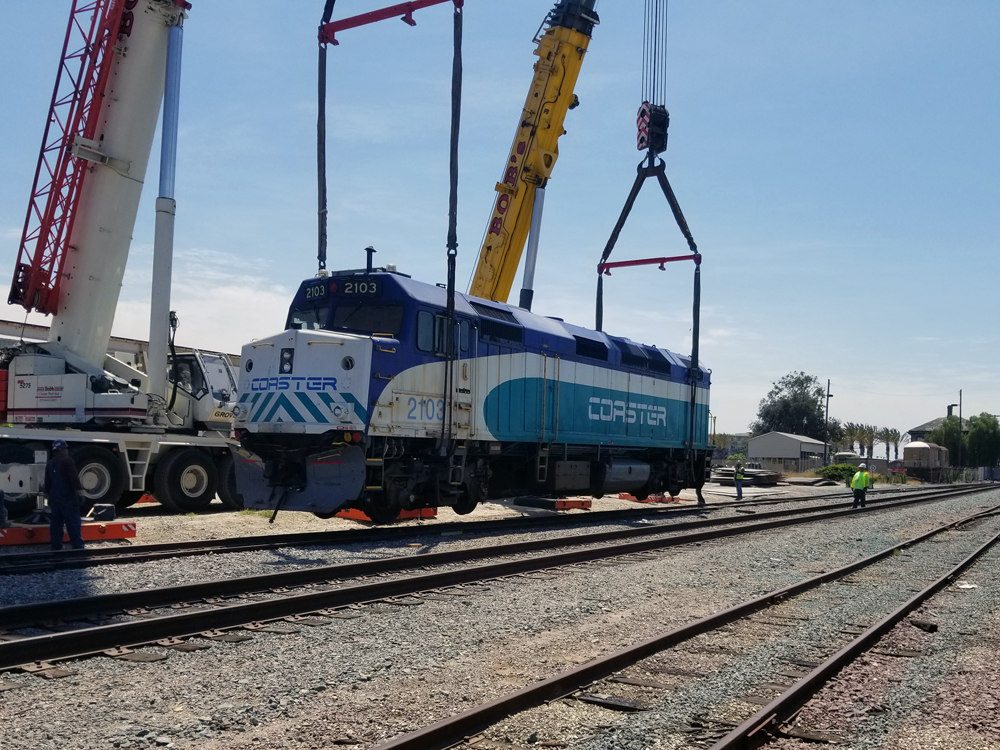 In early July, 2022, locomotive 2103 departed Anaheim for the long, indirect route back to National City via BNSF. A few days later, the PSRMA finalized an agreement with SCRM to transfer to them locomotive 2105. Locomotive 2103 arrived in San Diego on July 21st and was delivered to National City in time for the lift onto the truck dollies on August 3rd. On the night of August 4th, the locomotive departed National City, travelling a circuitous route to Campo to avoid roads with low overhead clearances and highway bridges with insufficient load capacities. The locomotive finally arrived in Campo on August 8th and was lifted back onto the rails on August 9th. 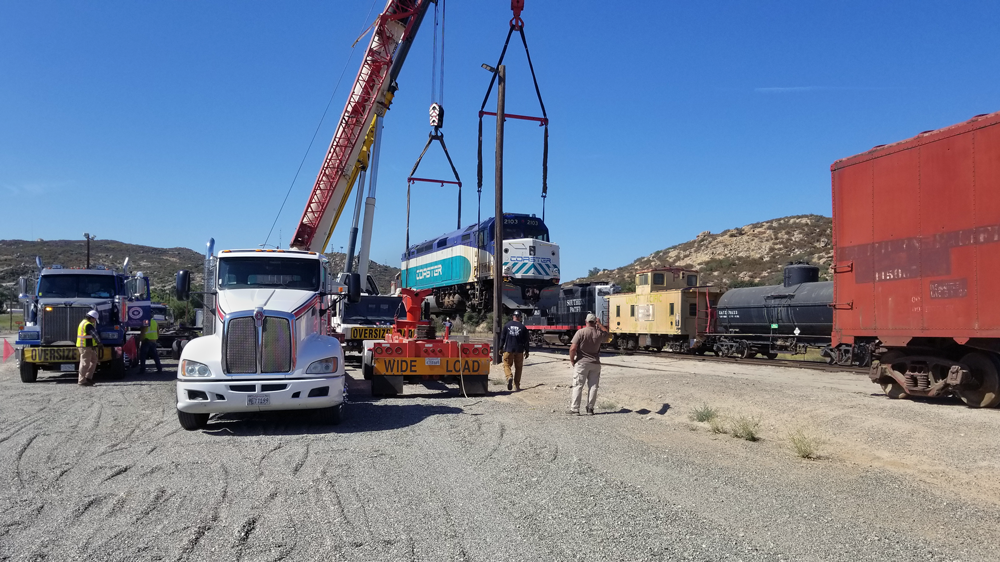 We are extremely proud of this acquisition, especially with all of the cards that were stacked against it from the outset! Our immediate plans for the locomotive are to give it a much-needed bath and to evaluate its suitability for use as a non-powered cab control car. Longer term, we will explore options to return the locomotive to self-powered operation.

We would like to thank our partners who made this acquisition possible, including NCTD, SDCAPCD, BNSF, CRS, CCC, Bob’s Crane, Plastic Express, Reliance Metalcenter, and others who are too numerous to list.

Please consider visiting our museum to see this latest addition to our collection! Please also consider donating towards this locomotive by visiting our website at https://www.psrm.org/donate/ and selecting the “Locomotive and Car Restoration” fund. Donations will help recoup the costs to truck the locomotive to Campo and will help us pay for future cosmetic work on the locomotive.

Thank you for your support. We look forward to seeing you soon in Campo!