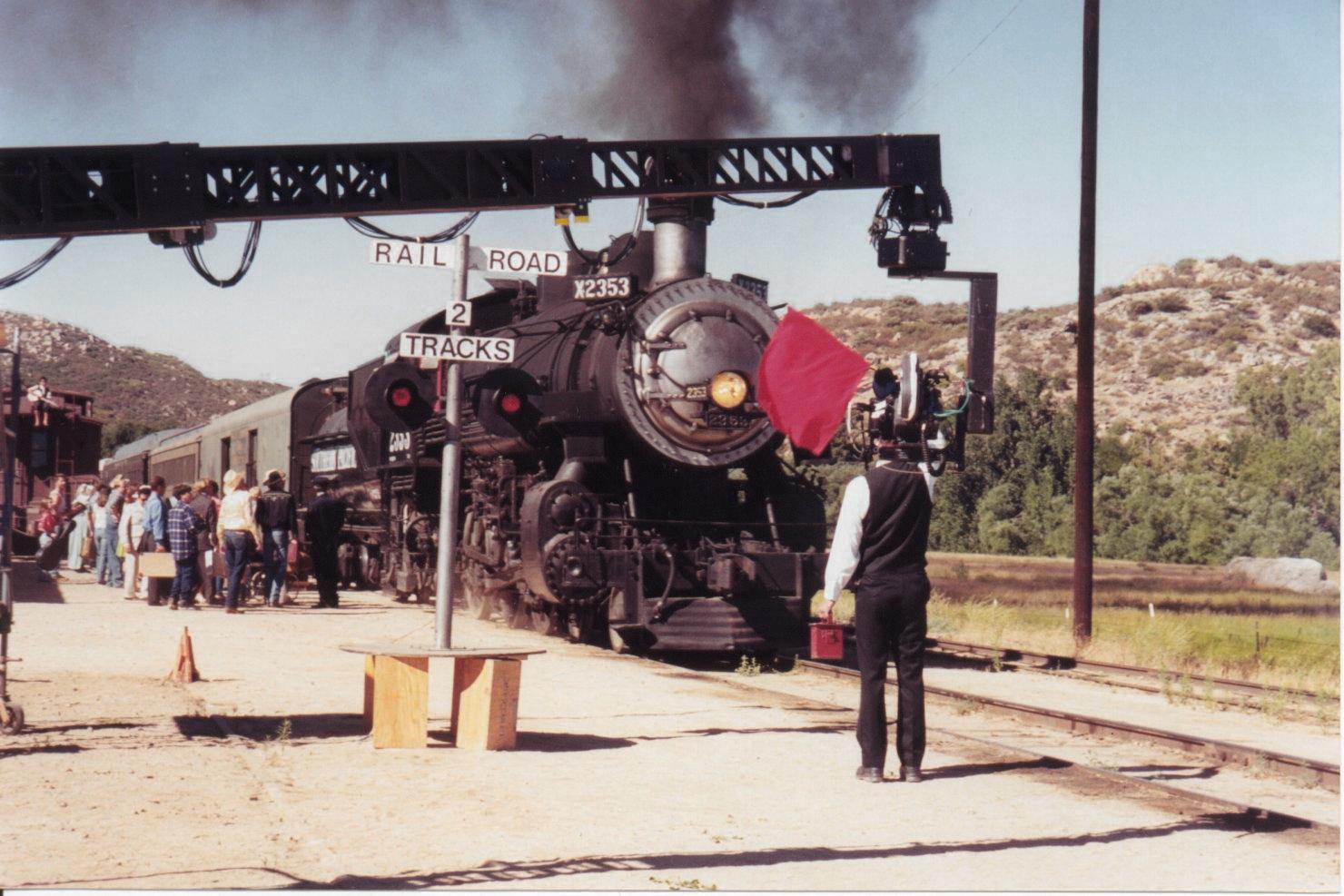 As documented elsewhere on this site the Museum completed a 10-year restoration of 2353 in 1996. The Museum volunteers operated 2353 from Spring 1996 until the Fall of 2000. This completed five years of operation, at which time Federal regulations required a major inspection of the locomotive.
On our last day of operation, we filmed an action sequence for the movie, PEARL HARBOR, and 2353 was rolled into our shop in Campo the afternoon the filming was completed. At that time, we anticipated that the inspection and known repair work would require six months to a year to complete. Under that timetable, 2353 would again be able to enchant our visitors with her early 20th century technology in mid-to-late 2001.

The major task was to perform an ultrasound examination of the boiler, to ensure that the 88-year old steel was still thick enough to safely handle the 200 psi steam pressure it had to contain. To do so, Museum volunteers had to remove all the various appliances, pipes, etc., that are mounted on the outside of the boiler. Then the sheet metal jacket was removed, followed by the “lagging” (insulation). The locomotive was “stripped.”

The ultrasound examination was completed, and calculations showed that the boiler was in good shape. Good news! We then proceeded to do a hydrostatic test, which required us to fill the boiler with water, then with a high-pressure pump, increase the pressure to 250 psi. There was a leak at one of the several hundred stay-bolts in the firebox. Stay-bolt replacement is a routine steam locomotive maintenance procedure, so we weren’t too concerned.

Alas, when the leaking stay-bolt was removed, we found a crack on the inside (water side) of the firebox at the bolt hole. This crack was not visible from any place that could normally be observed. To determine the extent of the cracking, more stay-bolts were removed. The initial crack was found to extend the full length of the firebox, about 10 feet, and a number of other cracks were found. Consultation with several boiler professionals suggested that at a minimum, the entire “crown sheet” (ceiling) of the fire box needed to be replaced. Estimated cost at that time, early 2002, was about $140,000. The approximately $20,000 that had been donated for our anticipated work came nowhere near covering this expense. Work stopped at this point.
Late in 2002, a new Board of Directors was elected for the Museum. As the new Board had their hands full with a number of issues not relating to 2353, the work hiatus on the locomotive continued.

In late 2003, the Board appointed member Jim Baker, who had volunteered his time working on 2353 for the last 12 years, to the position of Steam Foreman. His plan, as ratified by members of the Mechanical Department and the Museum’s Board, was to re-assemble 2353, and put her on display in the Museum’s Display Building. Certainly, having a locomotive “under steam” would be the best situation, but much can be done with a static display.

By April, 2005, the volunteers had completed the reassembly of 2353 and moved her to the Display Building. Over the next several months, they made the cab safely accessible to visitors, hooked up its lighting system, and set up some explanatory displays, both in the cab and on the floor. Several large photos identify all the major parts and explain their function. Drawings are used to show the interior arrangement of the boiler.
In 2008, we contracted with a very experienced and respected locomotive boiler inspector to examine 2353’s boiler. He told us that yes, we could repair the cracked area, but because there already were a number of other patches in the firebox, we could expect further cracking in a relatively short time. Other information we have indicates that the lifetime of the firebox on an oil-burning locomotive is about 12 years. The present firebox was installed by Southern Pacific in 1942, and the locomotive was operated by them until 1956. These facts convinced us that an entire new firebox was needed.

However, the boiler inspector pointed out that it would be extremely difficult, if not impossible to replace the firebox. Having originally been built in 1912, to an old design, the firebox is keyhole-shaped, and of the crown-bar type. The capabilities of present manufacturing facilities to produce the compound curves and flanges necessary to rivet a new firebox to the remainder of the boiler are quite limited. If the job could be done, it would probably cost more than an entire new boiler. And, we’d still have half of our boiler being about 100 years old. His recommendation was to have an entire new boiler built. This would be a modern welded boiler, with a radial-stayed firebox, but would be of the same outside dimensions as the present boiler. BUT, this would cost about $500,000.
At that time, a decision was made to evaluate ex-Coos Bay Lumber #11, a slightly smaller, saddle-tank locomotive, to see if restoring it might be something more practical for us to undertake. That evaluation is now well under way. Please see the status of that project in that portion of our web site.

Meanwhile, unless some very generous donor comes forward, SP 2353 will continue to be a display-only locomotive.

For further information or questions, or to join our Steam Team, please contact the Steam Foreman at baker@psrm.org.