In the last few years since our update of 2014, we have accomplished the following:

We are now at a point where we can get a testing company to come out and check the welds for quality via ultrasound or radiography. Our consultant, Stathi Pappas has suggested that some existing boiler patches and a couple of areas suspected of having “grooving” be radiographed. I’ll be working on getting those tests done in the next month or two. After that, we should have a very good handle on what will need to be done to return the Coos Bay to operation. Our concentration then will be to get some good estimates on what it will cost.

Some images to help tell the story:

In the last few years since our update of 2010, we have accomplished the following:

Outside, we steam cleaned the frame, but to start removing the things that obscure the frame, the brake and spring rigging, we will need to access the pit for a few days.  This may happen in September.

Because of the delays in accessing the shop, I decided that we really need to have a more permanent place to work on the Coos Bay.  Also, since the board recently met to come up for goals and plans for the future, I asked them to tell me where steam fell in their priorities, and if we could have a fixed location to do our work under some type of shelter.   They approved us setting up a work shelter for the Coos at the west end of Track 11 (under the ATSF gantry crane).  Depending on budgeting and space required, this space may be a tent-type fabric-covered one or a metal car port type.

Once all the brake and spring rigging is removed, we will be able to thoroughly clean the frame, and test with dye penetrant.  I’m guessing that this will take most of 2015 to accomplish.

If you would like to join our Steam Team or if you have further questions, please contact the Steam Foreman at baker@psrm.org. 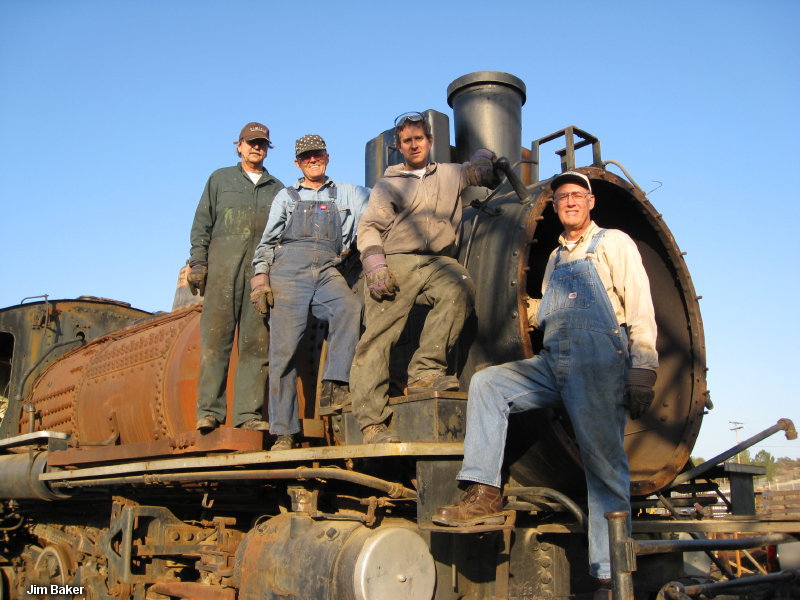 If you would like to join our Steam Team or if you have further questions, please contact the Steam Foreman at baker@psrm.org.
In 2008, we contracted with a very experienced and respected locomotive boiler inspector, Dave Griner, of Arizona Mechanical Engineering, to examine the boilers on both Southern Pacific 2353 and Coos Bay 11.

It was decided that Southern Pacific 2353 would be too expensive to restore at this time (see link), so we continued to evaluate Coos Bay 11. Mr Griner was optimistic in his visual examination of Coos Bay 11. Because it is such a major part of the locomotive, and probably the most expensive to repair, the boiler will be the first thing to take a good look at.

In addition to a visual examination, it will be necessary to do a complete ultrasound examination of the boiler to determine the thickness of the steel. Areas that have eroded to the point that they would be unsafe under pressure will need to be replaced, so the ultrasound testing will determine the extent of repairs needed to the boiler. Certainly, repairs to other parts of the locomotive will also be needed.

In order to get a good look at both the exterior and interior surfaces of the boiler, it would be necessary to remove the outer jacket and asbestos insulation, and all the boiler tubes. Then, all the accumulated scale and other crud that has collected inside the boiler would have to be cleaned out.

Fortunately, a number of years ago, a generous donor had agreed to do asbestos abatement work on all five of the steam locomotives we have at Campo. As part of that process, the saddle tank and sheet metal jacket had also been removed, so the locomotive was ready for us to start doing our job.

During the past several years, our volunteers have worked on this project, putting in over 1,100 man-hours (including some woman-hours). Sometimes the progress was very slow, since a number of jobs required extensive “learning time.”

In approximate order, we accomplished the following (see below for photos):