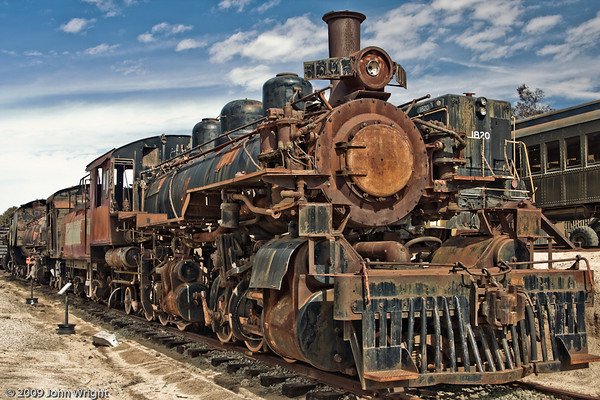 The Museum’s heaviest and newest steam locomotive is a compound articulated logging Mallet built with saddletanks and later given a tender.

Eddystone’s 2nd-last logging Mallet and last steam engine delivered new to Weyerhaeuser Timber Company, it was installed at Camp McDonald,WA as No. 110 (2nd), and used in Longview area logging operations. Weyerhaeuser replaced its rail spurs with truck roads in 1946. WT No.110 was then used between central loading points and a sawmill. In 1954 it was bought by Rayonier,Inc., numbered No. 111, and used on Rayonier’s ex-Polson Logging Grays Harbor County,WA lines on the New London (Hoquiam)-Railroad Camp 3 branch (all-steam until May 1967 abandonment, when it pulled the last train) and then as a standby on the New London-Railroad Camp-Crane Creek mainline until all steam operations ended later in 1967. A slopeback tender of unknown origin from Polson (ex-A&NM) No. 18 was added.

In 1968, the Mallet was bought by Georgia-Pacific Corporation’s 40-mile California Western Railroad, for use on Fort Bragg-Willits redwood area Super Skunk tourist trains. Rebuilt as CW No. 46 at the Fort Bragg shops in 1968-70, its tanks and fuel bunker were removed, making it a 2-6-6-2 without the “T”. Ballast was added under the running boards to restore traction, and also new cab seats, spark arrester, and an ex-SP whistle. It was painted vermilion, red, gold, and black, with a skunk cartoon on the rebuilt tender’s now-rectangular sides. CW No. 46 began its passenger service on the well-known tourist line August 20, 1970, pulling ex-Erie Stillwell coaches and ex-SP commuter coaches. Leased to Willis Kyle’s Mendocino Coast Railway in 1977, the CW ended steam service in 1981.

In July 1984 Georgia-Pacific donated CW No. 46 to the PSRMA. In May 1986, the Mallet was moved free on its own wheels by CW to Willits and SP’s NWP to Santa Rosa,where it was disassembled and loaded on two flatcars. One carried the tender and front chassis,the other the rest of the locomotive. It was taken free by SP, Santa Fe, and SD&IV to San Ysidro, unloaded and reassembled, costing the museum $ 7,000 for crane services. CW No. 46 went to Campo in reverse February 28,1987 on “Great Freight II”. It’s now on display in the museum yards,and will be restored to operating condition when funds become available. Baldwin’s 225-page 18″ x 24″ Construction Blueprint Drawings book was also donated. A CD containing digitized scans of the drawings is available. Please contact the Museum’s Steam Foreman for details.