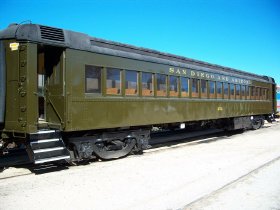 These low-roof 84-passenger closed-end commuter cars of copper-bearing steel are 70′ 1 1/2″ long and 13′ 6 1/2″ high, and have composite floors, rollover seats, spherical-globe light-fixtures, and four-wheel trucks. They originally weighed 148,200 lbs.(74.1 tons), had four fans near the ceiling, and window shades. Round-edge aluminum parts helped to avoid injuries and reduce rust. Each car had four GE 1,500-volt DC motors with collapsible pantographs to a 3,000-volt overhead catenary 24′ above the rails; top speed of 70 mph; and rooftop connections to a trailer car at one end, with motorman’s controls and Pyle headlight at the other. They were among 141 Pullman green motor cars built for Delaware, Lackawanna, & Western Railroad’s electrified Morris and Essex division in northern New Jersey, and were numbered DLW #2581, 2583, 2584, 2585, and 2586.

Beginning September 3, 1930 these cars worked the 70 miles from Hoboken to Montclair, Gladstone, and Dover (via Summit) in a 54-year service of legendary reliability. On October 17, 1960 the bankrupt Lackawanna & Erie Railroads merged to form Erie-Lackawanna, and the cars were renumbered EL #3581, 3583, 3584, 3585, & 3586. “Erie” was added to their letterboards to the left of “Lackawanna”, giving them unbalanced looks. The EL became part of Conrail April 1, 1976. On December 10, 1979, state-owned New Jersey Transit became owner of the commuter lines, although Conrail continued operating the trains. Vinyl seats replaced the rattan ones; #3583 was repainted green and #3581 and #3586 were painted red with white trim but were not lettered. The other two cars weren’t repainted, retaining EL lettering. Maintenance cutbacks and impending retirement caused the cars to become dilapidated. On August 24, 1984 NJT changed to an AC-current system and the DC cars were replaced by “Jersey Arrow” ones, and stored at Mahwah, NJ, where many parts were stolen from them.