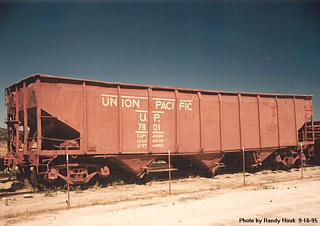 A self-clearing, open-top triple hopper, this durable veteran is typical of such cars, used to carry ore, sand, gravel, and coal.
Built by Pressed Steel Car Company, Mt.Vernon, IL; May 1949

UP #17801 was later retired and sold to the Southwestern Portland Cement Company at Victorville, CA. Numbered SWPC #34 and later SWPC #101, it was used as a ballast hopper at the cement plant, and on SWPC’s 15-mile Mojave Northern Railroad to its quarry in the mountains, acquiring a thick coat of gray cement dust.

On May 17,1984 SWPC #101 was donated to the PSRMA. It was trucked to Fallbrook, CA, and loaned to the Mitchell Company as a ballast hopper in rebuilding trackage on the Naval Weapons Station Annex. In 1985 SWPC #101 and museum-owned DAFX #89429 were moved south on Santa Fe’s Fallbrook branch and stored on the Marine Corps Base at Camp Pendleton, first at Stuart Mesa near I-5, and later in an industrial warehouse area. Taken to San Diego February 28, 1987 by the Santa Fe, they missed “Great Freight II” by a few hours. Moved to Matanuca, BC by the SD&IV, they were brought to Campo in March 1987 on the museum-operated “Great Freight II 1/2”.

In late 1987 SWPC #101 was cleaned, repaired, repainted red, and renumbered UP #7801 in its original 10″ yellow lettering. Due to a misreading of shadowed numbers on a photo of UP #7940 used as a model,UP #7801’s capacity and load limit numbers were temporarily repainted 100,000 lbs. less than they should have been. UP #7801 is in operating condition, and is the museum’s ballast hopper.