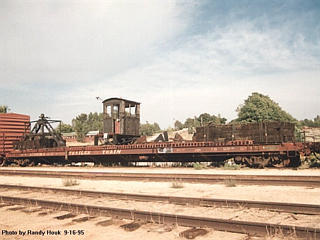 One of the first flatcars purpose-built to carry truck trailers in “piggyback” service, this long-length car pre-dated the formation of Trailer Train, and was part of its original fleet.
Built by Bethlehem Steel Company, Bethlehem, PA; February 1955

This Class F39 flatcar is 75′ long over end sills, 9′ 6 “wide, and 3′ 5-5/16″ high to the top of its deck, weighs 77,100 lbs. (38.6 tons), has a load-carrying capacity of 125,000 lbs. (62.5 tons), and load limit of 126,200 lbs.(63.1 tons). It carried two 35-foot trailers, or three 21-foot trailer bodies without bogies. It has a steel underframe, wood deck, steel side railings, a center sill with steel loops for tie-downs, four-wheel PRR V12125 ride control trucks, and Timken roller bearings. It originally had two 47″ high security stakes per side, and jacks & chains lading devices (tie- down chains, jacks, wheel chocks, and trailer support beams). The end-loaded car had 47” high crossover bridge plates at diagonally opposite ends, which could be lowered onto adjacent cars. With all bridge plates lowered, an entire string of flatcars could be loaded with truck trailers from one loading ramp.

In 1955, the Rail-Trailer Company’s subsidiary Van-Car Corporation financed and acquired 200 75-foot Class F39 flatcars, including this one, the first cars specifically designed for piggyback service. They were leased to the Pennsylvania Railroad, painted Tuscan red with white PRR lettering, and placed in service on its initial Truc-Train service between South Kearny (near Newark), NJ and Chicago, IL on March 3, 1955, the nation’s first major overnight long-distance piggyback service. Later that year the Trailer-Train Company was formed, initially owned by PRR, the Norfolk & Western, and Rail-Trailer, later joined by other railroads. TT operations began March 17, 1956, the first 500 cars being PRR’s F39 and F39A cars including PRR #470513, which was relettered TTX #470513. The “X” designated it as a non-railroad-owned car exchangeable between railroads. Its jacks & chains lading devices were never replaced by hitches, and it was relettered ATTX #470513 when last weighed and repainted at Kansas City, MO in October 1960. (Trailer Train cars were painted yellow after 1969). Later its stakes, crossover bridge plates, and most lading devices were removed, and it was used in container service, and also in general service, carrying steel plate, machinery, and other large items.

In January 1990 the museum requested the donation of two 75-foot flatcars from the Trailer Train Corporation to transport a turntable donated by the Santa Fe Railway from Fresno, CA to Campo, and ATTX #470513 (at Mira Loma, near Riverside, CA) and ATTX #470860 were donated, sent to Fresno, loaded with the turntable, and taken to San Diego and Campo by the Santa Fe and SD&IV in October 1990.

ATTX #470513 is on display near Campo depot, with turntable parts still stored on it pending the turntable’s installation on museum grounds. The car will then be restored as time and funds permit.