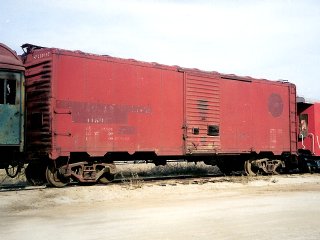 The car was originally built for the Southern Pacific and numbered SP #115067. Its service history is unknown. It was last weighed at SP’s Brooklyn shops (BKN) in Portland, OR in April 1962.

Sometime after that date, SP #115067 was transferred by the SP to its San Diego & Arizona Eastern subsidiary for Maintenance-of-Way use, and renumbered SDAE #1084-MW. When the Metropolitan Transit Development Board of San Diego County purchased the SD&AE from the Southern Pacific in November 1979, SDAE # 1084-MW was included in the purchase. For many years, the car was based in the SD&AE yard at Jacumba, CA, and was photographed there in June 1985. In 1990 it was brought to Campo to make room for construction equipment to be used in rebuilding two collapsed tunnels in nearby Carrizo gorge.

After some negotiations, SDAE #1084-MW was sold by the MTDB-owned SD&AE to the SDRM in 1992. When time and funds permit, it will be rehabilitated and repainted in its original colors as SP #115067. It is currently displayed in the museum yard at Campo and is being used for the storage of museum equipment.