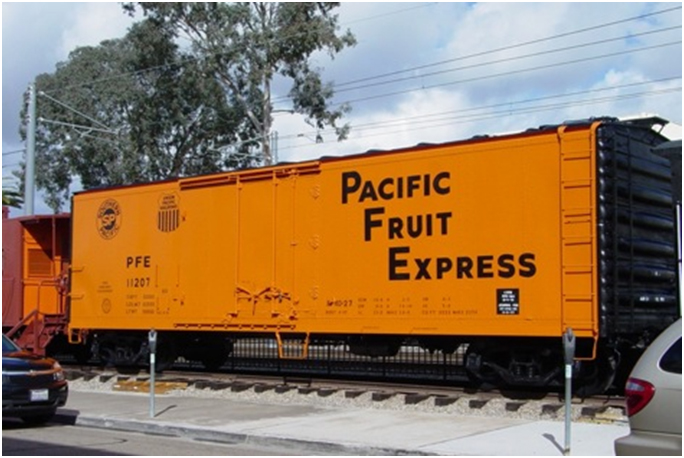 One of the last ice-type refrigerator cars built, this steel car is seen daily by thousands at its downtown La Mesa, CA location.

Retired in 1986, PFE #11207 was bought by PSRMA Board of Trustees member Dan Marnell for exhibit at the La Mesa Depot, operated by the PSRMA and the La Mesa Historical Society. The 1894 San Diego, Cuyamaca, & Eastern Railway depot is La Mesa’s oldest building. The car has been leased to the Museum by Dr.Marnell for $1 a year.

In July 1987 PFE #11207 was repaired by Museum members and steam-cleaned with a “Rig-Shine” machine. Though operable, PFE #11207 is on a display track, not connected to the adjacent SD&IV/San Diego Trolley tracks, so can’t be operated. But it’s seen daily by more people than any other freight car exhibited by the Museum!

In 2009 PFE #11207 and the entire train exhibit in La Mesa was power washed and painted, and then re-lettered by Larry Rose.