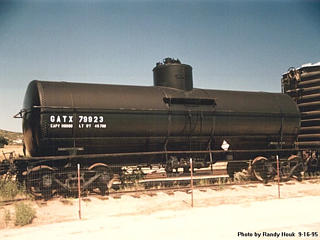 This example of the many thousands of “bottles on wheels” used throughout North America in the mid-20th century was the first tank car to be used by the museum.
Built by General American Transportation Corp., Warren, OH, or East Chicago, IN; 1927 (?)

The service history of GATX #79923 is unknown. In 1969 the car was donated to the PSRMA by the General American Transportation Corporation. It was brought to San Diego by the Santa Fe, and stored for 12 years at the Miramar Naval Air Station. In August 1981 it was moved to the SD&AE yard in downtown San Diego, where it was stored for another two years. In July 1983 the car was taken to San Ysidro by the SD&AE, filled with water, and used as a backup to the locomotive tenders on the museum’s,first “Great Freight” to Campo in July/August 1983.

GATX #79923 was completely cleaned, repaired, and repainted black with white lettering in July 1987 by a restoration crew of the museum’s volunteer workers. It is now on display in operating condition on the museum’s freight car line near the Campo depot.