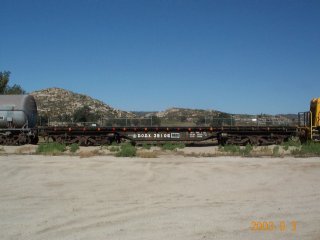 Built for the U.S. Army, this flatcar was originally lettered USAX #39106, the “X” designating it as a non-railroad-owned car that could be exchanged between railroads. Later, all such cars owned by all armed forces had their lettering changed to DODX, and USAX #39106 was relettered DODX #39106, although it continued to be Army-owned. Always painted Olive drab with white lettering, it was last repainted December 13, 1968 at the Army’s Rail Service Division facility at St.Louis, MO. DODX # 39106 later was at Stockton, CA and served in the east on Conrail, according to cards on the car. The flatcar was later declared surplus, and stored at the Barstow Marine Corps Supply Center’s Annex at Yermo, CA.

In early 1990 the museum applied at Yermo for the donation of a 100-ton capacity flatcar. One was selected, but due to an error it was sent to Base Maintenance, and its deck used as a loading ramp. DODX #39106 was selected a few months later. As the car was Army- owned, it had to be transferred on paper from the Army Rail Service Division office in St.Louis, MO to the Department of Defense Rail Service office in Bayonne, NJ before donation to the museum.

While the paperwork was being processed, the car carried its final military cargo from Yermo to the Naval Weapons Station at Seal Beach, CA in September 1990. It was then sent to the 32nd Street Naval Station in San Diego, where it was kept for months, due to a hold on the disposal of military railroad cars during the 1990-91 Persian Gulf operations. Donation papers arrived at the Imperial Beach, CA DMRO office in May 1991, costing $225 in administrative fees paid to the Surplus Property Department of California. DODX #39106 was moved to the SD&IV yard at San Ysidro, and on July 12, 1991 the SD&IV took it to Campo on “Great Freight IV”.

DODX #39106 is now on display at the museum in Campo in operating condition. It will be used in transporting car bodies and other large, bulky, and heavy items for the museum. Its warped decking will be replaced when time and funds permit. When repainted, the flatcar will be given back the original USAX #39106 lettering it carried for most of its operational career as an Army car.