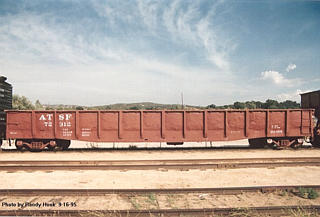 Typical of its type, this battered, utilitarian car was (and still is!) used to carry iron, steel, scrap, wire, and many other types of bulky freight not requiring protection from bad weather.
Built by General American Transportation Corp., Warren, OH or East Chicago, IN; April 1958

ATSF #72312 was used by the Santa Fe to haul all types of bulky and odd-shaped miscellaneous materials for over 21 years. Heavily worn, torn, battered, and badly dented, it was retired and donated to the PSRMA in September 1979 by the Santa Fe Railway.

Delivered by the Santa Fe to the Museum’s storage track at Miramar Naval Air Station in San Diego, ATSF #72312 was sandblasted and repainted by Museum volunteer workers in March 1981. It was moved to the San Diego & Arizona Eastern Railway’s downtown San Diego yard in August 1981, where it was further serviced by the Museum’s members and stored for two years.

In July 1983 the extremely large disassembled boom of the Museum’s locomotive crane, USN #84-00412, was loaded into the gondola. It was taken to San Ysidro by the SD&AE, and then brought to Campo on the Museum’s first “Great Freight” in July/August 1983. The crane boom was unloaded, and the crane was reassembled.

Repainted again and relettered in August 1988, ATSF #72312 is now displayed and maintained in operating condition near the depot at Campo. It is used on Museum work trains and for equipment storage, and is an excellent example of this unsung workhorse of the rails. In 1991, 18 of these GA-108 gondolas were still in service on the Santa Fe Railway, a testament to their hard-service durability.