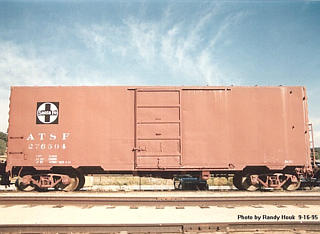 This car typifies the modern steel boxcars that replaced the older types when steel became available again after World War II, and is one of the first Pullman PS-1 boxcars.
Built by Pullman-Standard’Car Mfg.Co., Michigan City, IN; Oct.1947

This 40-foot steel-sheathed boxcar with welded draftsill under-frame, corrugated ends, and Superior seven-panel welded doors was part of the first group of Pullman-Standard PS-l’s built. In the first 18 months in which it built them, Pullman-Standard accounted for 40% of all boxcars built by commercial (non-railroad) builders.

Santa Fe’s boxcars & refrigerator cars at that time had the slogan “Ship and Travel Santa Fe All the Way” painted on the cars’ right sides, and one of four other slogans on their left sides: “Grand Canyon Line” (replaced in 1948 by “Texas Chief”), “El Capitan”, “Super Chief”, or “Chief”. Santa Fe divided most car classes into four groups, assigning left-side slogans in the above order, from lowest-numbered group to highest. However, all 250 Pullman Bx-52s had “Grand Canyon Line”, while 250 each of 750 similar Bx-51 cars built by General American Transportation carried one of the other three slogans. (“San Francisco Chief” was introduced in 1954).

After 32 years of service, ATSF #276594 was retired and donated by the Santa Fe Railway to the PSRMA in September 1979. The Santa Fe also delivered it free of charge to the museum’s storage track at the U.S. Naval Air Station at Miramar in San Diego.

In July 1983, the car was moved to San Ysidro by the Santa Fe and the SD&AE, and to Campo in July/August on the museum’s first “Great Freight”. It was cleaned and sandblasted in March 1985, and sanded and repainted Mineral brown (about halfway between Boxcar red and Tuscan red) in 1987. The car’s lettering and Santa Fe emblems were repainted, but not its slogans. These will be reapplied when time & funds permit. ATSF #276594 is displayed in operating condition at the Campo museum, where it’s used to store museum equipment.