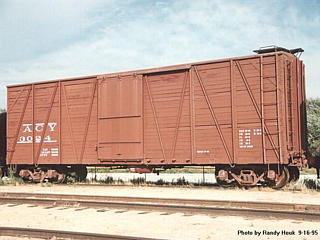 This outside-braced wooden car is a very rare example of thousands of Mather boxcars designed in the early 1900s that were extremely popular in the first half of the 20th century because of their simplicity, sturdiness, reliability, durability, & low cost. They disappeared from North America’s railroads very quickly when the nature of freight railroading changed in the 1950s and 1960s.
Built by Mather Stock Car Company, Chicago, IL; June 1941

ACY #3024 was leased to and lettered for Ohio’s Akron, Canton, & Youngstown Railroad by the Mather Stock Car Company. Many small railroads like the AC&Y, which originated much off-line traffic in smaller industrial cities, found leasing boxcars met their needs better than purchasing, both operationally and financially. After years of railroad service, ACY #3024 was no longer needed, and reverted back to the leasing company. As Mather had meanwhile been merged into the North American Car Corporation of Chicago, the car was relettered MCAX #3024, using that number until retired.

In October 1969 the North American Car Corporation donated MCAX 3024 to the PSRMA. Brought to San Diego, it was stored at the U.S. Naval Air Station at Miramar until taken to Campo in July/ August 1983 on the museum’s first “Great Freight”.

During its restoration in the first six months of 1986, MCAX #3024 was taken down to bare wood and metal by museum volunteers, an unusually difficult task because of its outside steel bracing. It was repaired, restored, and repainted Boxcar red with its original AC&Y markings. Of the hundreds of AC&Y boxcars that Mather built, only seven others (five without trucks) exist, all at the Mid-Continent Railroad Museum in North Freedom, WI. The February 1991 issue of Railroad Model Craftsman magazine featured a color photo of restored ACY #3024, and used it as the subject of its HO-scale model drawings.

Now on display in operating condition on the museum’s freight car line near the Campo depot, ACY #3024 is an outstanding example of railroad museum freight car restoration.