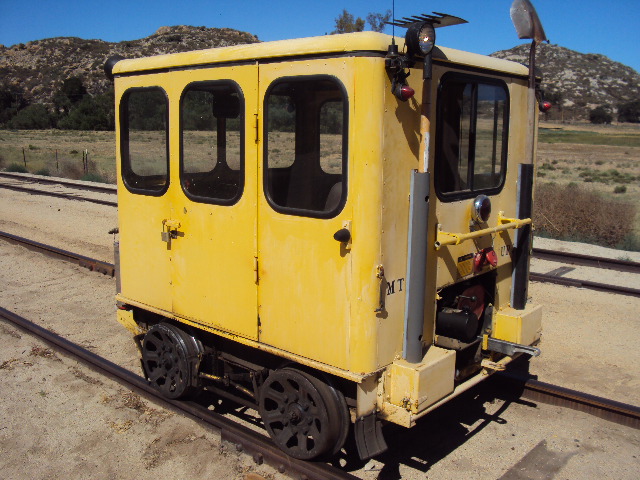 Based on the Onan engine serial number, this speeder was one of the last produced by Fairmont. It was delivered to the Union Pacific in late 1986. The car was number 2644 of its’ line and UP just added their initial ahead of the Fairmont number to create the railroad designation. Original options included the current lighting package, gas heater, windshield wipers, rail sweeps, noise isolation group, and factory turntable. The motor is a two cylinder, 20 horsepower Onan B48G with oil filter. Painted a light brown, it is one of few Onan engines without the trademark green color. Both opposed pistons fire at the same time.

The car probably saw light use on the Union Pacific as the transition to Hy-Rails was already well under way in 1986. By 1990 UP had sold most of its’ motorcars auctioning many at Fort Worth, Texas. UP 2644 passed through brokers to narrow gauge Sumpter Valley Railway (SVRR) in Oregon. They intended to narrow it, but never did.

SVRR loaned this speeder to the Idaho Northern Pacific Railroad at Island City, Oregon. While on the INPRR the factory turntable (worth as much as the rest of the car) was stolen, as well as the rare original wiper motors. Sumpter Valley reclaimed the car, and by action of the board of director, sold it to Wayne Parsons, of Granada Hills, CA, in April, 2004. Parsons upgraded the car to North American Railcar Operators Association safety standards and restored the car to service in February, 2006.

New brake rigging was installed. The vacuum fuel pump originally mounted on the blower house, was replaced with a more reliable and accessible electric pump and filter mounted on the transmission. The carburetor was overhauled by Onan and new ignition parts installed. The factory turntable was replicated with a combination of used and new old stock turntable parts and a modern Monarch Dyna-Jack 12 VDC Power Unit. Wiring was repaired, and a brake light installed. The gas heater was removed to make more room in the cab. A custom made front hitch was installed. A US Forest Service approved spark arrestor was installed in place of the original muffler. Seats and seat belts were added.

The original UP 2644 designation was restored. With the exception of a modern low profile strobe, the car looks externally the same as when in service on Union Pacific. The car was purchased from Wayne Parsons by PSRM in 2006. The car was rewired by member George Toussaint in 2008, adding a fuse block and a total vehicle master electric switch.

The UP2644 continues to provide track inspections and Fire Patrol for PSRM today and into the future.