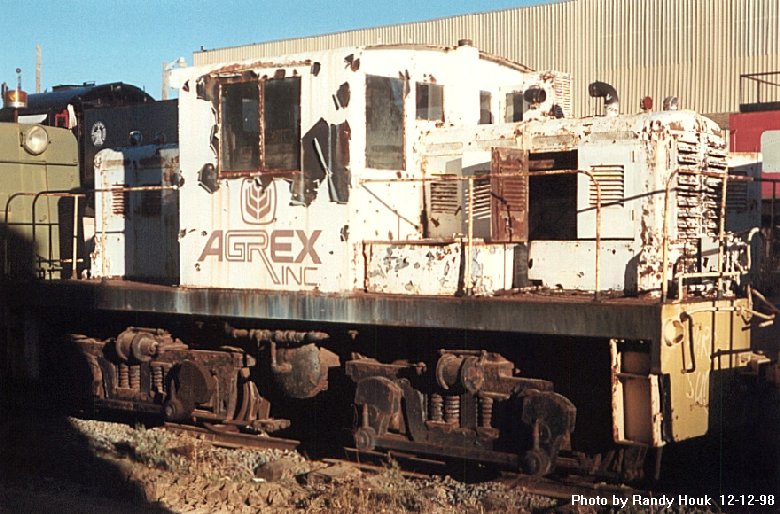 This 45-ton ex-Navy siderod centercab Industrial switcher with automobile-style end grilles worked only in southern California, and has been numberless since 1963.

This 4-axle Diesel-electric switcher was one of about 70 Class 45 DE-27b locomotives built for the Navy in World War II. Builder’s #60649, it has a designated weight of 90,000 lbs. (45 tons), though actual weight could vary, and several locomotives weighing 50 tons were built to the same Navy specification. Because of its weight designation, requiring a crew of two on common carrier railroads under the “90,000-pound rule” of 1937, which industrial and military railroads were exempt from, it is called an Industrial switcher. It’s 26′ 10″ long, 9′ wide, 11 ‘6″ high; has 33″ wheels in an Al-Al arrangement; a centercab; two small headlights on top of each hood (which may have been added later) instead of the usual one large headlight per hood; and 1940s automobile-style end grilles.

Power is provided by two Cummins HBI 600 Diesel engines developing 150 hp each at 1,800 rpm, totaling 300 hp. It has Westinghouse traction motors on two of its four axles, with siderods connecting the powered axles to the unmotored ones. Its generators, like those of most Whitcomb locomotives, are also from Westinghouse. It has a 22:1 gear ratio, and top speed of about 20.5 mph.

Built new for the Navy, this switcher was delivered to the Naval Ammunition Depot (later Naval Weapons Station) at Seal Beach in Orange County, Ca. in 1945. Its initial service number is unknown to the museum, but in 1949 it was assigned USN #65-00316 while still at Seal Beach. After 18 years of Navy service, USN #65-00316 was sold in 1963 to a used locomotive dealer and stored at the former Pacific Electric Railway 8th Street yard in Los Angeles for four years. No number was ever assigned to it after being sold by the Navy. In early 1967 it was sold to Koppel Bulk Terminals, a grain bulk-loading firm in Long Beach, Ca. Koppel was later taken over by AGREX, Inc., a bulk-loading agricultural export firm. It was then painted white with brown lettering and “grain” logo (but no number), yellow handrails & endplates, and black decking and underframe. It was used to switch grain cars in the docks area of Long Beach.

Some years later AGREX, Inc. went out of business and the switcher was abandoned and subsequently acquired by the Port of Long Beach. In early 1988 it was donated to the PSRMA by the Port, and shipped to the museum at Campo on a flatbed truck in June 1988. The AGREX switcher is currently on display in the museum yards awaiting full repairs and restoration, when time and funds permit. It will then be repainted (probably in its original Navy colors), relettered, and given a number, possibly its original (currently unknown) Navy one or #65-00316 (“316” in abbreviation), its only known number. The siderod centercab locomotive will then be used as a yard switcher.