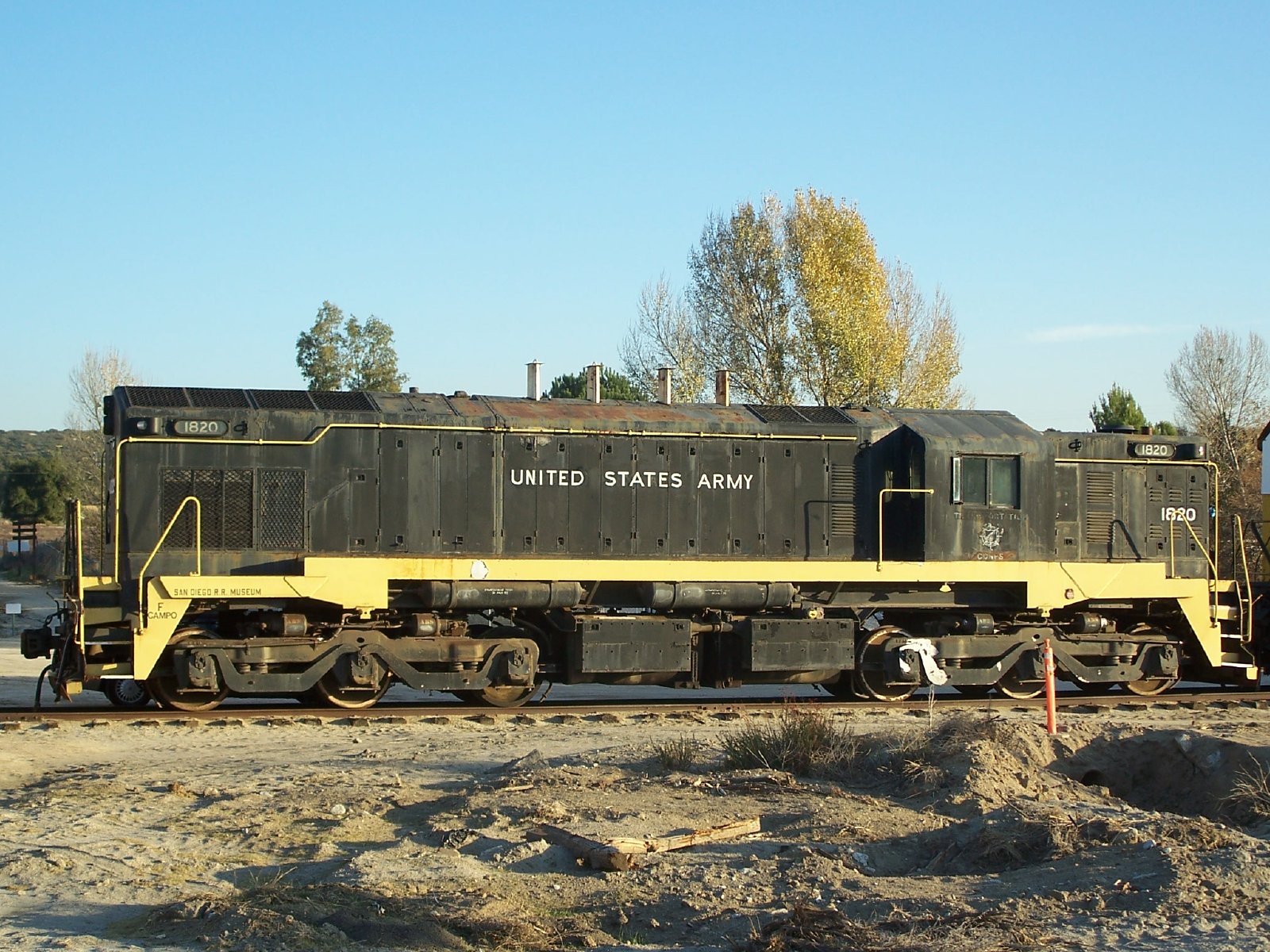 After a break-in on the Belt Railway of Chicago, USA #1820 went to Canada for cold-weather evaluation on Canadian National Railway’s Hudson Bay branch from The Pas to Churchill, Manitoba, from November 1952 to April 1953, returning to the BRC. In June 1953 it was sent to the U.S. Army Transportation School at Fort Eustis, Newport News, Va., where it was painted black with yellow trim and white lettering: “United States Army” on its long hood sides, “1820” on its ends and short hood sides, and winged-wheel emblem and “Transportation Corps” on its cabsides. The deck sides later received diagonal yellow and black stripes. About 1962 it ran into a train of coal cars. It was repaired, but still has a ten-foot frame twist. It was repainted in January 1970, with short hood numbers removed, and cabside lettering and emblems replaced by “1820”. In 1971 it was sent to the National Transportation Group, Rail Service Division’s storage site at Hill Air Force Base near Clearfield, Ut. (south of Ogden and under command of the Tooele Army Depot 63 miles southwest). A photo of USA #1820 illustrated EMD MRS-ls in The Second Diesel Spotters Guide in 1973.

In 1981, the museum sought two low-mileage MRS-1 locomotives. Only the EMD type were available, as ALCo/GE units were then classed as “strategic material”. In early 1982, USA #1820 was donated to the PSRMA with some components missing (including brake handles), after release as surplus by the Army Rail Item Manager in St. Louis, Mo.. It cost $500, paid to California’s Surplus Property Department, plus charges to have its journals repacked and air brake tests made. It was taken free of charge with EMD MRS-1 USAF #1809 (also donated) by the UP, Santa Fe, and SD&AE to San Ysidro, Ca., and brought up to Campo in July/August 1983 on the museum’s first “Great Freight”.

Repainted in its 1953 scheme of black with yellow trim and white lettering and emblems, USA #1820 will be used as additional and backup power on museum trains.