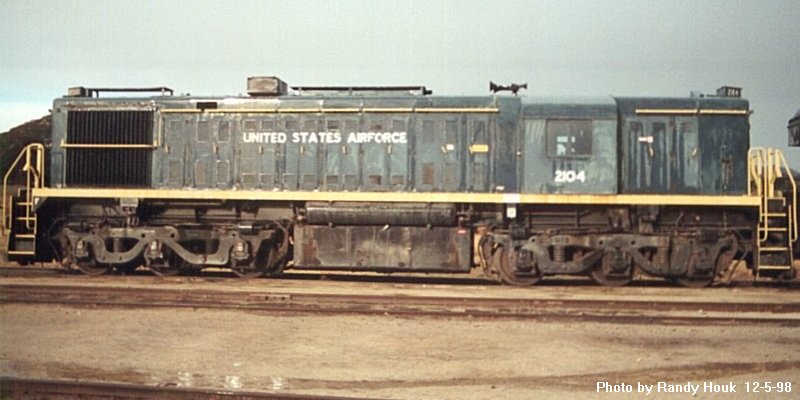 This turbocharged, variable-gauge road switcher was acquired by the museum after only 700 hours of operating time and 157 Hobbs meter hours.

Multiple-unit (MU) capable, it was painted black with yellow trim, white lettering and Transportation Corps insignia. It has two small heaters in the short hood for cold-weather warming of cooling system and lubricating oil; stanchions on its sides for shipboard tie-downs; bases for european-style end buffers; and was engineered so its braking system could be modified to apply vacuum or english style brakes. Its custom design & cost-plus contracting gave it an as-built cost of about $500,000, highest of any museum locomotive.

USA #2104 was sent new to a storage facility at Marietta Air Force Station in Marietta, Pa. (later under command of the New Cumberland Army Depot, 28 miles north near Harrisburg), as the Army no longer had a need for it. It was on a 1960 New Cumberland MRS-1 roster and was sent to Loring Air Force Base near Caribou, Me. in May 1975. In July 1977, it was sent to the National Transportation Group’s Rail Service Division storage yard at Hill AFB near Clearfield, Ut. (south of Ogden and under command of the Tooele Army Depot, about 63 miles southwest).

In January 1979, it was put back in operating condition for transfer to the Air Force, renumbered USAF #2104, and painted Air Force blue with yellow trim, black underframe, and white letters. On January 26, 1979 it was sent to Vandenberg AFB near Lompoc, Ca. to replace EMD MRS-1 USAF #1809 (now also museum-owned). USAF #2104 was operated by Chemical Systems Division of United Technologies, a civilian firm, and moved Titan missile part shipments two or three times a year from the SP mainline near Surf, Ca., the SLC-5 complex at South Vandenberg. Usually idle, in 1982 USAF #2104 was moved to an enginehouse 11 miles away in the main section of Vandenberg AFB.

By 1986 USAF #2104 was no longer needed at Vandenberg, and was to be sent to Loring AFB, Me. again. Pits on some journals prevented the move, and it was declared surplus in 1987. Offered to rail groups & museums, it was declined due to acquisition and repair costs. After more study, our museum requested it, and USAF #2104 was donated to the SDRM in March 1991. It cost $5,000 in administrative fees paid to the California State Surplus Property Department, plus the costs of repairs made at Vandenberg AFB by museum volunteers.