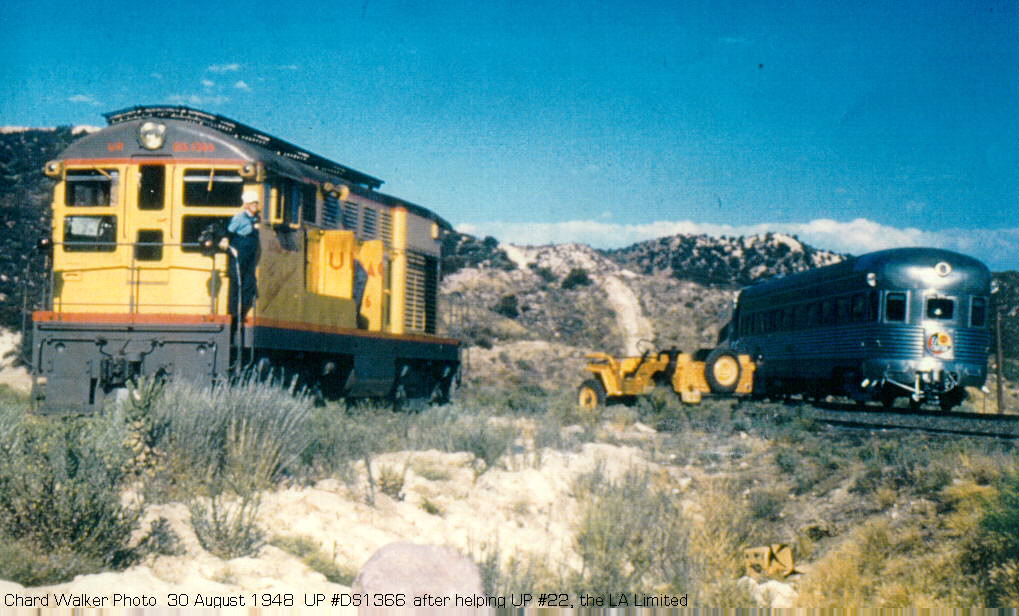 This high-hood Raymond Loewy-styled end-cab demonstrator is the museum’s most powerful locomotive, with an unusual opposed-piston engine. It was one of the first 96 single-engine, B-B freight hoodtype, 2,000 hp Diesel-electric locomotives and is one of only three survivors.  Built by Fairbanks-Morse Company, Beloit, Wi – June 1947

On October 17, 1947 eleven H-20-44s, inlcuding the two demonstrator locomotives, were delivered to the Union Pacific Railroad for $250,000 each, in Armour yellow with Harbormist grey hood & cab tops and underframes; red striping & letters; and green cab/engine room interiors. They were numbered UP #D.S. 1360-70. The “D.S.”(later deleted) differentiated Diesels from steam locomotives. This locomotive was numbered #D.S. 1369, with “Serves All the West” and “Road of the Streamliners” on its cab sides. Used as helpers over Cajon Pass, and from Barstow to Kelso in California’s Mojave desert, the H-20-44s had problems with heat and altitude and proved difficult to maintain. As 500 HP per axle wasn’t generally accepted at the time, only 96 H-20-44s were sold.

Retired in November 1962, UP #1369 was sold to the Southwestern Portland Cement Company in 1963. It’s “13” painted over, it worked as #69 on SWPC’s 15-mile Mojave Northern Railroad from Victorville, Ca. to its mountain quarry, handling 500-ton trains on the line’s 3.5% grade. Air filters were added to its air intake openings for cement plant dust protection, and the cab was air-conditioned for desert summers. In 1969 its yellow areas were painted green and it was renumbered SWPC #408 in red, retaining its grey & red areas.

Appraised at $62,000 by Chrome Crankshaft Company in August 1983, SWPC #408 was donated to the PSRMA by Kennecott Copper on May 15, 1984 and moved by the Santa Fe and SD&AE to La Mesa depot, arriving July 5, 1984.  Several Museum volunteers visited SWPC prior to donation to run and evaluate the condition of the various H-20-44s remaining on the property.  Finding all of them to be in similar condition, volunteers selected #408 to be donated to PSRMA which, at the time, was thought to be the demonstrator unit (#D.S. 1366).  However, after the Illinois Railway Museum began restoration on a sister locomotive thought to be #D.S. 1369, mechanics found that many of its parts were stenciled/stamped for #1366.  It was later determined, after checking the builders plates on both locomotives, that a clerical error during SWPC’s renumbering caused the histories of SWPC numbers 408 and 409 to be swapped.

The locomotive was reconditioned, renumbered #1366 and repainted Armour Yellow in 1998.